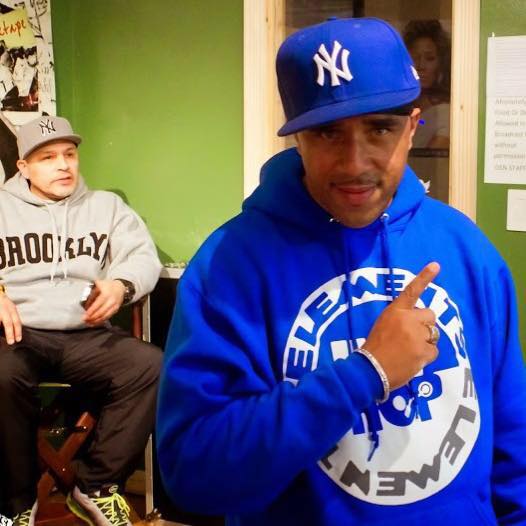 The first chapter in Mikey D’s career as an MC begins with him performing at shows, park jams, and making underground tape classics that were circulated through out the tristate area. After this period of time in his history he recorded several iconic singles with the late legendary producer Paul C. Mikey D and Paul C collaborated on the singles: “I Get Rough [link]“, “My Telephone [link]” and “Coming In The House [link]“. The notoriety of Mikey D and Paul C are permanently connected through those singles and the album “Better Late Than Never”.

The second chapter in the career of Mikey D continues with him replacing Large Professor as the lead rapper in the group Main Source in the 90’s. Sir Scratch, K-Cut, and Mikey D created the album F–k What You Think [link]. The first single on that album was “What You Need [link]“. Madonna eventually sampled the bass-line from “What You Need” for her song “Human Nature [link]” on her album Bedtime Stories. There are several classic cuts on F–k What You Think which further cement Mikey D into the history and foundation of Hip Hop.

The third chapter in Mikey D’s history includes the formation of the group: Elements Of Hip-Hop. WIth Mikey D on lead vocals the group released the album: Calm Before The Storm. The songs “Hip Hop Ain’t The Same [link]” and “Beastin” were released as singles. Calm Before The Storm was designed to be the prelude to the epic album: Day Of D’Struction. The first single “Inspiration [link]” from Day Of D’Struction has already been released. The current single “Back To The Future [link] (Produced by: Calvin Trouble Jones)” has been released and is creating waves. “Back To The Future” is a blockbuster single which gives the audience a taste of lyrical time travel with Mikey D’s vocals from 2015 and 1995 combined. This is a first in Hip-Hop. The album Day Of D’Struction will be released shortly. Elements of Hip-Hop consists of Mikey D, DJ Mercury, and DJ Slice. They are ready to hit the ground running in order to perform, entertain and thrill audiences worldwide.